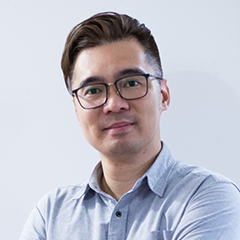 Product Innovation Director
Dr. Kenneth Fung joined Imagene Labs in August 2018 as the Product Innovations Director. He oversees the research and development of innovative products, and is responsible for the QC/QA of raw materials and finished goods for successful product launch. He works closely with the sales and marketing departments to bring innovative products to the market. He obtained his PhD in Biochemistry in 2006 from The Chinese University of Hong Kong. He did his postdoctoral research at School of Biological Science, Nanyang Technological University, Singapore from 2006 to 2009. His team was the first to report it was possible to induce cell differentiation on half of the embryoid bodies (EBs) while maintaining the other half in un-induced stage with a microfluidic culturing platform. He was appointed as Scientific Officer in 2009 by Eu Yang Sang Singapore.
He invented and patented a novel extraction process for the concentration of nutraceutical compounds from Red Yeast Rice, a traditional Chinese medicine, which can help in regulating blood cholesterol. This invention has led to the commercialization of a health supplement “Eu Yang Sang CholesFREE” worldwide. He was appointed as Senior Scientific Officer in 2012 to 2014 by Clearbrige Nanomedics. His project on nano-composited nanofiber was supported by National Research Foundation, Singapore. Most recently, he was with Firma Skin from 2014 to 2018 as Scientific Director, where he oversaw the R&D and commercial launches of new skin care products.